For the past while, we've been developing advances in technology that have allowed us to analyse and incorporate important data from reviews on other websites.  From a base of less than 2,000 native reviews, we just launched yesterday a massive increase to effectively 49,000 reviews.  What this means, from your perspective as a user of this site, is that you now have a ton of information from which to draw from, in your search for the right supplements to match your goals.

By using natural language processing techniques, we can now analyse the texts of reviews and determine with reasonable accuracy, which effects the users experienced from their use of the supplements.  This includes beneficial effects, such as fat loss, strength, or taste, as well as side effects, such as headaches, crash, and nausea.  So far, out of the 42 effects we have on this site, we've covered over half of them to include in the extraction process, and out of the 39 side effects we list, we've included almost half of them.  We chose these effects on the basis of the popularity of the searches for them over the past few years on this site and its predecessor, as well as having knowledge of the fact that people are most interested in the side effects of a supplement, as much as its main purported effects.

If you’re like most lifters, you have no problem putting in the time and effort necessary to exercise intensely and consume a protein-rich diet. But where you may be (knowingly or otherwise) missing the mark is in terms of getting proper rest. Whether you have a busy lifestyle that doesn’t allow for sufficient sleep or have simply been taking your pre-workout too late in the day, failing to get adequate rest can have a substantial impact on your progress. Unfortunately, many lifters don’t view a lack of sleep as detrimental to their progress, and some take the lack of sleep as a badge of honor. But if you’re not getting enough sleep, you’re really only cheating yourself and compromising your progress. For this reason, you may want to consider a supplement like PharmaFreak’s GH Freak, which aims to encourage deep sleep to maximize rest and recovery.

Universal Nutrition is one of the most storied, trusted brands in the supplement industry, and over its several decades in the business, it has faced much less controversy than many newer brands. So when this company releases a product, people take notice. Animal Rage XL is a reformulation/update of the original Animal Rage, which was a powerful pre-workout released during a period in which insanely highly caffeinated products (such as Muscle Marinade) and those containing 1,3-dimethylamylamine were all the rage. It is noteworthy that Universal elected not to include the fad-inspiring ingredient 1,3-D, suggesting the company takes research and safety seriously. Animal Rage XL continues in that tradition, with a relatively long list of ingredients, but most with significant research to back up their effectiveness.

Animal Rage XL, like nearly every pre-workout, is built upon an energy complex that prominently features caffeine. Due to the proprietary blend, the label does not disclose the actual amount, but it is likely significant, given then warning not to take more than two scoops per day. The energy complex also includes coffee bean and green tea extract; the former may help enhance weight loss1, while the latter has been cited for beneficial effects ranging from improvement of muscle recovery2 to fat burning. In addition to those "quick energy" ingredients, Animal Rage XL also contains a "sustained energy" complex, which features adaptogens such as rhodiola rosea, cordyceps, and ginseng to promote endurance. In this way, Animal Rage XL doesn't just offer an intense, initial burst of jittery energy, but helps offer a more balanced, consistent increase in energy levels for the entire duration of your workout. Additionally, the product contains a relatively new ingredient in GlycoCarn, or glycine propionyl L-carnitine HCl, which is intended to promote improved blood flow and fat metabolism.

While some supplement companies are just hopping onto the blend bandwagon when it comes to protein powders, Met-Rx has been producing blends of fast- and slow-digesting protein for years. The company’s latest offering is MyoSynthesis Whey, a blend of dairy proteins intended to help keep amino acids fueling your muscles for hours. With 25 grams of protein per serving, MyoSynthesis Whey can be a great source of protein for any time of day, or to use as a base for a custom meal replacement shake or weight gainer. In addition to the protein blend – which can encourage a sustained period of muscle protein synthesis compared to one-source powders1 – MyoSynthesis Whey offers several other extras that make it a great value and a top choice when it comes to blends. Considering how crowded that market is now, this means that Met-Rx definitely has a winner on its hands.

The SubstanceReviews app for Android is now available, free of charge, on Google Play.  It allows you to navigate much of the information available on this website.

Following up from our previous post, here are a few more of the screenshots from the app, as it would look on a Google Nexus 4 running Jelly Bean.

The main screen is divided into 3 tabs: Brands, Goals, and Ingredients.  Since we showed you these tabs in our last post, we'll just focus on what's new for the release.

We've added a Popular Brands item at the beginning in the Brands tab.  It allows you to quickly navigate to the respective brand pages. 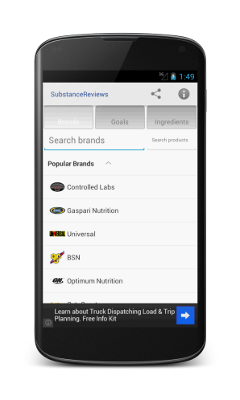 We realized that the app wouldn't be too useful without a product search feature, so we made sure it's there. You can search for a product by a keyword in its name. 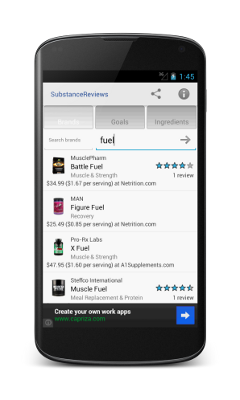