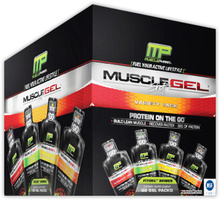 Do NOT add free item to your cart.Free item will be added automatically to your shipment.

MusclePharm®'s MuscleGel® is a gel based supplement that enhances the body's ability to absorb nutrients, ensures a consistent delivery of hydrated nutrients every time, provides a soothing effect to the digestive system, and tastes great.

MuscleGel® is packaged in a portable convenient gel pack, that makes it easy to consume on the go, without the use of liquids or mixing.
Throw a few Gel-Packs in your gym bag, lunch bag or purse for an easy, high-protein, low-calorie, sugar-free meal supplement. MuscleGel® can be ingested without water, so it's easy to consume, even in extreme and unusual circumstances. ProFusion™ gel technology enhances the absorption and utilization of each nutrient. The ingredients are ready, available and packed with all the sheer supplemental power and good taste you've been waiting for.

MuscleGel® is a game-changer for nutritional supplementation.
No longer do you have to take the time and mess with making protein shakes or eat those chalky tasting protein bars. You now have a new option for getting the purest form of protein in your diet.
MuscleGel® is a revolutionary; high-performance nutrient delivery system manufactured using a patent-pending process called ProFusion™ Technology.ProFusion™ Technology...
Average user rating from: 148 users

Written by soundcheck129 - #1 reviewer - View all my reviews
MusclePharm's MuscleGel Shot is definitely a unique product, so it's a shame that the company changed the primary source of protein from whey protein isolate to collagen (which isn't a complete protein). However, the nutritional profile is still impressive, with 90 calories, 22 g of protein, no fat, 2 g of carbohydrates, 1 g of fiber, and no sugar. The product also offers vitamin C, riboflavin, niacin, vitamin B6 and pantothenic acid, so it's not bad at all. If there were a rating for "convenience", this would get a definite 5, as the individually packaged servings are awesome, totally unmatched. This even beats beef jerky as a go-to low-carb snack for traveling. You can take this anywhere, as they don't require refrigeration, but I find freezing them for a while improves the texture and taste, making it pudding-like. Flavorwise, these are epic. The Key Lime Pie and Tropical Mango are great, I have yet to track down the other flavors. If MP does go under, I hope someone else picks up this product. It's that good.
Was this review helpful to you?

Full review on Bodybuilding.com
Thursday, 29 May 2014

Full review on Bodybuilding.com
Tuesday, 06 May 2014