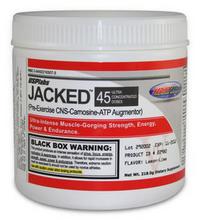 Like having tons of energy, strength, stamina and endurance for your workouts? Who doesn't? There's nothing like the right combination of compounds taken pre-workout to deliver consistently mind-blowing workouts to help you achieve your goals. After all, if your workouts suck, you can all but forget about making killer progress anytime soon.

USPLabs Jacked gives you the mad aggressive desire and ability to lift more weight, pump out more reps and have crazy lasting energy, along with sick muscle-engorging pumps. Jacked is easily the most intense pre-workout product you will ever want to use again. The amount of energy and focus is perfect, pumps and vascularity will be out of control, but most importantly you will feel great throughout your entire workout. No crash, no bloat, no headaches, no blow workouts.

Side benefits may include fat loss due to potential appetite suppression, as well as through increased work capacity and the possibility of increased norepinephrine release.

Schizadra increases physical force. In essence, it is able to provide a stimulating effect to the body and mind.

Both of these compounds belong to the family of methylxanthine compounds. They are both able to stimulate the CNS, while also stimulating contractility of skeletal muscle directly and this may partially be due to the release of catecholamines such as norepinephrine. Caffeine also has the benefit of fighting fatigue and drowsiness; enhancing the flow of thoughts; increasing alertness and improving intellectual efforts along with producing euphoria or a sense of well-being in some cases. Just as these methylxanthines can increase the effectiveness of compounds, it is thought that it may do the same for the unique compound found in Geranium.

Carnosine is an extremely important dipeptide that is generally present in rather high concentrations in skeletal muscle, though it is also found in nervous tissue and other excitable tissues as well. It is so important because it acts as a buffer of sorts, preventing the increase of acidity or Hydrogen ion accumulation in skeletal muscle; something which is thought to contribute to the fatiguing of muscles.

Furthermore, by increasing carnosine levels, power output can be increased as well. In short, you are able to improve your power output, while also delaying fatigue; you can lift more explosively and for longer periods.

While we may negate the increase in Hydrogen ion levels in skeletal muscle by increasing carnosine levels, we still must overcome one more obstacle in order to allow us to prevent fatigue while working out. In this case, we must use a compound which can ultimately increase the adenosine triphosphate (ATP) levels in muscle. ATP, as we all know, is a high energy nucleotide which acts as the major energy carrying molecule in our bodies.

Consequently, muscle fatigue is also related to energy loss in skeletal muscle, specifically, ATP being converted to adenosine diphosphate (ADP). In effect, one phosphate group is lost and must be replenished in order for the muscle cell to continue on working.

By supplementing with creatine, we are able to increase the levels of phosphocreatine in muscle. Phosphocreatine is a high energy buffering compound which is able to donate a phosphate group to ADP, allowing the formation of ATP once again.

In short, we can prevent or reduce fatigue from occurring by increasing phosphocreatine levels, which in turn will allow for the regeneration of ATP from ADP leading to greatly reducing physical and muscular exhaustion.

Written by Reggie - View all my reviews
If I could recommend one product, it would be Jack3d by USP Labs. If you can find it, the Jack3d with 1-3 is best, but the stuff without is good too. First the pros:
-Great flavor (other than lemon-lime)
-Unreal focus and energy
-No real crash

If you follow dosages properly you won't have a problem. I loved it so much, I was taking three scoops 6 days a week. It started to lose it's effects, but after I went cold turkey for a month, it came back.

Jack3d has been the best and most useful product I have ever used. I credit all my PR's to it, and can't imagine what I would do without it
Was this review helpful to you?

Written by mk10ev - Top 50 reviewer - View all my reviews
Owh man where to begin talking about jack3d. This was my best friend, my sole mate for the first years that i started lifting. Any that asked for a supplement to post this was the first thing id recommend anyone to take. The focus the energy the alertness all mix into this godly formula to give you the best pump of your life.

unfortunately it was taken of the market. This was due to the 1,3 DMAA inside which was an FDA Banned drug. I still have dreams about jack3d and how much i miss it. No preworkout has been able to replace the close bond that we once shared.

they came out with the micro, which was not the same.
Was this review helpful to you?

Written by a1_re4 - Top 50 reviewer - View all my reviews
I had heard of all of the buzz about USPlabs Jack3d long before I even got a chance to try it for myself. I have used other pre workout mixes such as: Driven Sports Craze, C4, and other good pre workouts. I use the original formula of Jack3d, not the 3D micro version. I mixed the Jack3d powder and water in my shaker cup with ease. The mixibility is great and I did not have any bits or clumps of powder. The taste is pretty good, and it tastes better when you use less water. You can definitely tell the effect that 1-3 dimethylamylamine has in a pre workout substance. I had an abundance of energy after taking Jack3d. It seemed to really kick in 30-45 minutes after I took it. I was able to lift more weight during my bench press exercises than without using Jack3d. I got a nice pump going and was alert. The energy was enough for me to do many sets of Bench Press, as well as, pull ups, push ups and hammer curls. The only problems I had with this substance are sleeplessness, as the energy from Jack3d lasts hours after you take it, and I felt depressed following my workout. I was definitely having mood swings.
Was this review helpful to you?

Was disappointed by this product. Ingredient profile was appealing, but did not live up to expectations or other reviews on it.

Taste was actually pretty good, very much like sweet lemonade with a sharper aftertaste (but not bad at all). I appreciate that USPLabs uses natural flavoring and natural coloring. Mixes almost instantly in water, but few particles floating that do not dissolve, but that's not an issue for me.

At one scoop - I felt and noticed no discernable effect. At 2 scoops - I did not feel or notice any mental or physical energy boost, but did feel the parasthesia from Beta-Alanine (only recognizable side effect as well)

Value-wise it fails for me personally. It suggests no more than 3 scoops per 24 hrs, so that would be my maximum - which at best would allow me 15 workouts for the container. If someone noticed effect from 1 scoop, it was be very well priced - but for 15 workouts, it's a bank breaker for sure IMO.

Speaking on safety, as 1,3-dimeth. is still being studied, it's basically somewhat of an unknown for long-term use. Caffeine of course, would have tolerance effect if used frequently.

I would not purchase this product based on effect (why would you if it doesn't work as claimed for you) and based on amount I would need to see effect, cost is unreasonable.
Was this review helpful to you?

Written by soundcheck129 - #1 reviewer - View all my reviews
USP Labs has had some issues with their products living up to promises in the past. So what did they decide to do? Craft a pre-workout product with effectiveness that could not be argued...and that would be Jacked. And just to make sure it gave a kick in the pants worthy of the hype, USP Labs made the serving size 3 scoops, which would have anyone bouncing off the walls.

I elected to only use 2, and I was not disappointed, great energy and stamina for the duration of my workout. And that's significant, as I've used a lot of stimulants in the past. Taste was alright, sort of a watered-down Sprite flavor.

Price-wise, Jacked doesn't appear to be a good value, but that's judging by the 3-scoop serving size, which will NOT be necessary unless you A) want to be bouncing around like a hummingbird or B) have a VERY high tolerance to stimulants.

I was a big fan of the original Jacked, so I figured picking up the new Jacked would be a good idea. I was curious to try the Fruit Punch flavor, but as soon as I opened the tub, I knew I made a mistake. The smell, and as I found later, the taste, were very unpleasant - it seemed like an attempt to make a Pina Colada that went horribly wrong. Also disappointing was the lack of fizziness, which the original version had.

On a more serious note, the energy wasn't much to brag about; whatever formula change occurred between versions stripped out some of the power. Also unpleasant was the intense tingles from the Beta Alanine; usually I don't feel anything, but this was very uncomfortable and distracting. All in all, the older version was much better.
Was this review helpful to you?