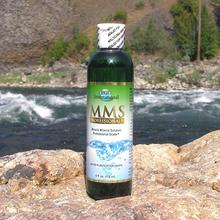 This Breakthrough can save your life, or the life of a loved one. The answer to AIDS, hepatitis A,B and C, malaria, herpes, TB, most cancer and many more of mankind's worse diseases has been found. Many diseases are now easily controlled. More than 75,000 disease victims have been included in the field tests in Africa. Scientific clinical trials have been conducted in a prison in the country of Malawi, East Africa.

Written by Anonymous
I have been using MMS for some years. Like anything, ice cream for example, you can overdose!
I believe the secret to using MMS is always taking low doses - no more than 4 drops at any one time with at least a 4 to 5 hour wait time in between. We know this stuff is very powerful. You may not know it but you already use it yourself but you don't know it! Chlorine Dioxide is used every day by thousands of water distribution companies all over the world to keep water clean and fresh! Its used in the UK in both toothpaste and mouthwash and people notice how clean and fresh their mouth is. The key is its used in minute quantities because its powerful stuff. Its been sold for many years and still is in camping shops for those heading to the outback or jungle. 1 drop will make a gallon or 4 liters of drinkable water out of a swamp. That's powerful! A bad reaction means you are mishandling it. Drive a car dangerously it will kill you. The key is to kill the bugs in your body when they first arrive. Let them dig in then linger and you may never get rid of them. This stuff dissipates to harmless salt in about 2 hours. As we are 65% water - maybe 80% when it comes to the blood you can see in theory it may just work. As an occasional long time user I can say that it certainly does. I am 69 years of age, in good health and I am the natural father of a 6 year old and drive a jet ski once a week.
Was this review helpful to you?

Written by Anonymous
my wife and I took MMS and we were running to the bathroom for diarrhea, t stomach pain , throwing up and chills even after 10 hours after we took only one dose.
Was this review helpful to you?

Written by Anonymous
MMS got rid of all my joint pains in approx 3 weeks and also my sun hives which would appear at the beginning of every summer. What is important to note about MMS is that the formula for it changed. When I first used it around 2010 it was two liquids mixed together, one of those liquids was 50% Citric Acid. This has now been replaced by 4% HCL - Hydrochloric Acid. The old formula with 50% Citric Acid caused a lot of stomach upset, whilst the new formula with 4% Hydrochloric Acid aids digestion.

Also the way people are told to take MMS has changed - instead of very high doses, people are now encouraged to have very low dosages - usually upto a maximum of 3 drops per hour for upto 8 hours a day.

A lot of the negative reviews of MMS were from the use of 50% Citric Acid - taking it with 4% HCL makes MMS much more gentle on the body. As others have said, when I first used MMS I noticed I was flushing out many strange things from my body in my stools. Some of which may have been parasites.

I also believe I flushed out mercury from my body from years of dentist fillings as a child. The smell I would get of my stools was exactly the same smell as being in the dentist chair having a new filling put in. I think accumulated mercury might have been the reason I had sun hives every summer and once flushed out the sun hives just went away and stayed away. Before MMS I had to be covered in head to toe with long sleeves or sun cream - now I can walk in the sun with shorts and a T-Shirt and no sun screen and I'm totally fine, I never burn now.

With regards to joint pains - my wrists used to click and my toes would click when walking, within 3 days of taking MMS the clicking stopped.

For those of you considering taking MMS use the version with 4% HCL in it not 50% Citric Acid and most of the negative things you read about MMS won't apply.
Was this review helpful to you?

Written by admin - Top 50 reviewer - View all my reviews
I was recommended this by a friend, so I thought I would investigate it first and then give it a try.

After starting on a 3 drops per day dosage and intending to build up to 15, I investigated some more and realized that what I was doing was quite silly - putting a non-selective biocide into my body - so I stopped immediately, and continued to use it for another purpose - as a mouthwash. For this, it works extremely well.

It is just ridiculous to assume that a substance that destroys organic matter can selectively kill "bad" bacteria and leave the good ones (e.g. intestinal flora) alone, and that's what made me extremely dubious about the claims made for it.

In fact, even though as mouthwash it works better than anything I've ever used before, in this function I don't think it's particularly safe. That's because when rinsing with 4 drops of MMS mixed with 4 drops of citric acid in a mouthful of water, a few hours later I notice tiny pieces of cheek tissue becoming loose and detaching. This causes tissue regeneration, and guess what that can increase the risk for in the long term? That's right - cancer! Exactly the disease that the MMS proponents claim it cures.

The supposed background of Jim Humble (the "inventor" of MMS) is also extremely suspect. Here's a paragraph that you can find scattered around the web:

"Jim began his career in the aerospace industry in which he decided upon becoming a research engineer. Jim doesn’t speak of this often, but he worked on the first intercontinental missile, worked on lunar vehicles, wrote instruction manuals for the first vacuum tube computers, set up experiments for atomic bombs, completely wired up the first machine to be controlled by computers at the Hughes aircraft company - and also invented the first automatic garage door!"

Astounding! If he did just two of those things he might be considered an absolute genius. This "bio" cannot be found on his website, but how could similar ones be found across the web if it hadn't originated from one place? The last sentence is easily verifiable as false: http://sites.google.com/site/mmsdebunked/home/jim-humble-claims/garage-door-inventor

One blogger presents an excerpt from an eBook on the 2008 version of his website (it must have been removed since) that includes this:

"He had 100% cure rate of over 75,000 malaria patients and 388 out of 390 documented aids patients. It was achieved by using the MMS to create Chlorine Dioxide."

On his current website (http://jimhumble.biz/index.php?option=com_content&view=article&id=38&Itemid=66), in describing MMS 2 (another pool chemical), Humble says this:

"What we found out recently is that MMS (now called MMS1) when given to HIV people generally cures all of their health problems associated with the HIV, but it does not cure the HIV in some cases. It is more valuable than the HIV drugs for treating HIV, but it doesn't kill the HIV virus always, just sometimes."

This must have also originated from Humble's own writings:

"Note: Jim Humble is completely altruistic with his relationship with the miracle mineral supplement - he has given it away to the world to get it out there and does not receive any financial remuneration from the proceeds of it being sold."

Maybe, but his website does currently state (http://jimhumble.biz/index.php?option=com_content&view=article&id=23&Itemid=2) that "You get a 50% commission for each book you sell and you don't have to handle the book, money, or shipping. To request information about how to become an MMS affiliate..." There you have it! He makes his money on the sale of his books, not MMS, and you can become an affiliate and make money too!

(I didn't rate this for low side effects, simply because I didn't get to the suggested dosage and I didn't want to experience nausea nor diarrhea.)

It is extremely dangerous to use this as a mouthwash. i just had gum surgery to attempt to restore my gingiva, which I believe one year of using MMS as a mouthwash destroyed a substantial amount of.

Do not, I repeat do not, use Miracle Mineral Solution as a mouthwash unless you too want to lose your gingiva!

I will be posting a review of Listerine Zero which contains sodium lauryl sulfate, a substance that has similar effects in this respect to sodium chlorite.
Was this review helpful to you?

Written by shadow - View all my reviews
I tried it for about 5 weeks with little or no change physically. I had hoped that it would help my arthritis but it didn't. I had diarhea 7 days altogether and cut the dosage each time and would build back up again in dosage. I was at 15 drops a day one time but when I went to 3, back to diarhea. Consequently, I've given it up.
Was this review helpful to you?

Written by bko - View all my reviews
This substance is designed to kill virus, bacteria, and diseases. It is 100% effective and can cure cancer as well.

What is this substance? Chlorine Dioxide - it's best if you do your own research on the Internet. Be skeptical of course but don't stop your research just because a few people say it's a scam. It might just save your life one day...

I personally do not know anyone with cancer but am looking for someone with cancer to try this (or any major disease). There are tonnes of testimonials out there but they are not anyone I know!

Note: You must follow the instructions carefully or it won't work and you're going to be one of those lamers that say it doesn't work.

I have been using this for 4 weeks now. I've almost got it up to 15 drops a day. I hit several 'walls' which caused diarrhea and nausea. Apparently it's your body flushing out dead virus and bacteria.

I've noticed during these 4 weeks that my body has flushed out strange black jelly like substances in my stool (no it's not blood). If I were to guess I would say it's some kind of build up in my intestines. So in a way this is like a detox. I've seen this in my stool for about a week or so and there's no more of it. I can say my stool looks 'healthy' if there is ever such a thing!!

I have a complete log of my consumption of MMS and the side effects which I will post at a later time (when I'm completely finished).

I've also been using this substance to clean my teeth. Within 1 day of proper use (please follow instructions carefully as instructed by Jim Humble), that's 3 applications of MMS, my mouth is completely cleaned of bacteria. I have no bad breath and there is absolutely NO bacteria that can be scraped from my tongue! My tongue looks very healthy and I can taste foods much more. After the first day of usage, I experienced some pain in my gums. It lasted for about 2 days. I figure it must have been the result of the MMS killing bacteria and/or virus from my gum and teeth and left it a bit sensitive. I don't notice that anymore.

Hope this review will help combat some of the negative comments and misinformation about MMS on the Internet. Even if you don't want to consume it, you got to at least try it for cleaning your teeth! That alone will save you hundreds and thousands of dental bills later!
Was this review helpful to you?