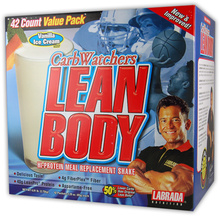 Carb Watchers Lean Body® makes it easy to stay in great shape, and perform at your peak! Just tear open an easy-to-use packet and stir into 16 oz. of ice-cold water to make a smooth, delicious shake.

You can enjoy the same benefits of advanced nutritional technology that world-class athletes do, with new Carb Watchers Lean Body®!

Sucralose is the only low-calorie sweetener made from sugar. Products sweetened with sucralose provide good-tasting, lower-calorie alternatives. It is about 600 times sweeter than sugar and can be used like sugar in a broad range of foods. Sucralose can be used in place of sugar to eliminate or reduce calories in a wide variety of products, including beverages, baked goods, desserts, dairy products, canned fruits, syrups and condiments.

Sucralose was discovered in 1976. More than 100 scientific studies conducted over a 20 year period have conclusively determined that sucralose is safe for everyone to consume. Sucralose was recently approved by the United States Food and Drug Administration (FDA), and by the Joint FAO/WHO Expert Committee on Food...
Average user rating from: 26 users

Written by soundcheck129 - #1 reviewer - View all my reviews
Nutrition
This is a very carb-friendly MRP with only 12 grams of carbs along with 40 grams of protein and 4.5 grams of fat, and only three grams of sugar. Not a full meal replacement at 250 calories, but it'll do between meals.

Mixed up a bit thick which is fine by me, no uneven clumpiness.

A lot of companies can call something "ice cream", but Labrada wasn't joking, because this had a very creamy taste, rich and almost-frosting like in flavor. It's not plain vanilla but very sweet and dessert-like. I'm a fan.
Was this review helpful to you?

Full review on Bodybuilding.com
Tuesday, 29 May 2012

Full review on Bodybuilding.com
Tuesday, 08 May 2012