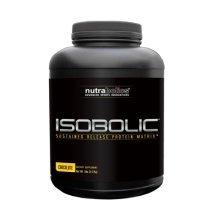 Serious athletes dedicated to continuous progress in size, strength and muscularity are super conscious of the quality and quantity of their daily protein intake. That's why Nutrabolics developed the "industry standard" for protein supplements - IsoBolic. No ordinary off-the-shelf protein product, this unique supplement incorporates the best science has to offer. Point blank, IsoBolic is a true Designer Bodybuilding Food, a must-have supplement that should be at the root of every elite competitor's nutritional arsenal.

Native Micellar Casein - In several studies, IsoBolic's major protein component, Micellar Casein, has proven to maximize net nitrogen retention, absorption efficiency, and protein synthesis. Micellar Casein behaves like tissue protein (chicken, beef, etc.), because it congeals in the stomach and the breakdown process elicits a time-release effect on protein synthesis. In that respect, IsoBolic performs much like whole food and delivers a slow, sustained release of amino acids into the bloodstream. This slow, six-hour dispersion period increases total protein synthesis and can be a valuable adjunct to a structured diet and vigorous weight-training regimen.

Egg Protein Isolate (Egg Albumin) - Egg Protein Isolate is a rich source of sulphur-bearing amino acids critical to numerous pathways that enhance cell repair. Also known as "methyl donors," sulphur-producing amino acids assist in the formation of methionine, which is the first amino acid to "join the team" when creating many new cells and is, therefore, a "must have" to promote an effective use of protein.

Written by soundcheck129 - #1 reviewer - View all my reviews
Cinnamon Oatmeal

Isobolic is a great product, I love the profile - two scoops gives you 45grams of protein with only 4 grams of carbs, and it's a blend of casein, egg and whey, making it perfect anytime. This would be my go-to powder (I'd even give up 12 hour!) if not for one thing - the taste. I guess the name is accurate, because this tastes like bland, old oatmeal that's been sitting in your car too long. Not much cinnamon taste, just very blah. Luckily it comes in other flavors, I'll have to investigate those. Other than the flavor, this is a top-notch product.
Was this review helpful to you?

Written by History in Effect - Top 5 reviewer - View all my reviews
Nutrabolic's Isobolic is a product that you should get to know real quick. A lot of bodybuilders and ordinary people like using Dave Palumbo's keto diet. This fits in as the carb ratio is low and the protein source is comprised mostly of whey isolate. I put two scoops in a Blender bottle and let it rip. Mixing was first rate for sure, so it was time to taste it. The taste is not bad even though I mixed it in water. I can tell when a product is made for milk, water, or both. This product is made to be mixed in milk as the flavors chocolate and raspberry yogurt taught me. You get 16 servings for about 32 dollars which is 45 grams in a servings. Obviously, you can use one scoop after your workout and be full.
Was this review helpful to you?

Full review on Bodybuilding.com
Thursday, 01 May 2014