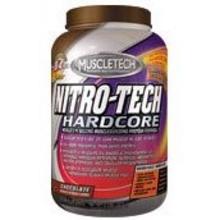 Backed by research spanning a decade, doctor formulated Nitro-Tech Hardcore is the top selling protein formula! From reigning Mr. Olympia Jay Cutler, to eight-time pro champion Dexter Jackson, to devoted gym warriors like you, more bodybuilders have used Nitro-Tech Hardcore to build head-turning muscle and steal the spotlight than any other protein formula in the world!

Each serving of Nitro-Tech Hardcore contains a Nitrogen Delivery System™. This exclusive system consists of three anabolically infused blends – each loaded with high-quality amino acids that have a proven track record for building muscle. The first is SynthePro®, an exclusive, ultra-absorbing amino acid matrix designed to maximize muscle growth. The second is Insulogen®, a complex of anabolic insulin drivers designed to support insulin secretion, maximize insulin sensitivity, and prime your muscles for nutrient supersaturation. Nitro-Tech Hardcore’s third proprietary blend is Nitroxen®, an amplified nitric oxide accelerator formulated to turbocharge amino acid delivery to your expanding muscles for a surge of serious growth.

Nitro-Tech Hardcore also unleashes Nanomolecular Hyperdispersion Technology™, an advanced technique which nanoparticulates a precise portion of protein particles to a fraction of the size of regular protein particles. Nanomolecular Hyperdispersion Technology is designed to hyperaccelerate muscle metabolism and protein synthesis to build muscle faster than any other protein can! What’s more, Nitro-Tech Hardcore’s multiple components are designed to operate synergistically, to make your muscles explode with new size, starting with your very first dose!

So don’t waste another workout with an inferior protein supplement! It’s your turn to join top pros, like Mr. Olympia Jay Cutler, and countless other Americans who have experienced dramatic muscle growth with Nitro-Tech Hardcore. Don’t wait! Start adding the slabs of granite-hard muscle that are guaranteed to get you noticed everywhere, now!

Written by veeshmack - Top 5 reviewer - View all my reviews
I wouldnt normally pay an outrageous amount on a protein. and fortunately, I didnt here. I got a box of samples with about 3 packs of each flavor of muscletech's nitro-tech. I took it, cause i had no reason not to, its just protein, not some kind of steroid that they hype it up to be. In all honesty, they did a great job with the flavoring on this bad boy. Tastes really good and i wouldnt mind using it regularly for that reason alone. The profile on the other hand is still sub par. Using primarily protein concentrate, and a large prop. blend (as always) consisting mostly of a cheap filler, creatine monohydrate (as always).
as good as it tastes, i still cant justify paying as much as they are asking for it
Was this review helpful to you?

Written by JWQ - Top 50 reviewer - View all my reviews
Nitro-tech is without a doubt the WORST protein I have tried. The price was outrageous, the taste was atrocious, mixability was non-existant and the recovery abilities were no better than any "pedestrian" proteins.

I would not suggest this for anyone wanting a protein that works or values there money.
Was this review helpful to you?

Written by soundcheck129 - #1 reviewer - View all my reviews
Although a lot of people criticize MuscleTech for their marketing, the company actually has some well-designed, quality products. Nitro-Tech, for example, contains glutamine, amino acids, ALA, an insulin-driving compound and a nitric oxide accelerator. All that and 20 grams of protein with only a few grams of carbs and fat. The Triple Chocolate Milkshake is pretty good, similar to Scivation's Chocolate except a lot richer. Nitro-Tech has a nice selection of flavors, but it is a bit pricey.
Was this review helpful to you?

Written by History in Effect - Top 5 reviewer - View all my reviews
Nitro-tech Hardcore is a protein powder that is more than just protein. This stuff has glutamine, creatine, leucine, and other stuff. It also have the trademarked Nano-Diffuse technology will allows great absorption. I put 10 oz in milk and the mixing was not bad. I prefered 10 oz instead of 8 because I like my shakes to be thin, not thick. Anyway, the Triple Chocolate Milkshake was delicious and rich with chocolate taste. I had no complains with it. The price for 2 lbs is under 30 dollars which in my opinion is a decent buy for a Muscletech product considering they are pretty expensive compared to others. This product will certainly fulfill your creatine daily intake for the day, so it would not be a worry unless you want to take creatine separate. If the money was there, I would buy this stuff even though I want to see this protein without creatine in it.
Was this review helpful to you?