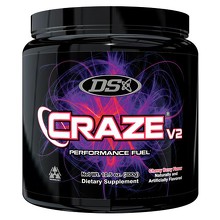 No product has been so eagerly anticipated as Craze v2 and once you have tried it you will see why. Driven Sports have done an amazing job not just in creating a great preworkout but completely altering our perception for what a preworkout should look like. When Predator Nutrition first tried Craze v2 we didn't know what to expect but after working on the beta testing with Driven Sports we were seeing results that we had never seen before from any preworkout and this was a blind sampling session where of eight users, none knew what the product they were testing was.

The feedback from these sessions using Craze v2 was unlike anything we had experienced before in a supplement. Everyone from Predator Nutrition who tested Craze v2 remarked on how they felt as though the weights were almost an extension of their physical selves with many saying they felt in a state of flow, a psychological state characterised by feeling at one with your body, confident that you are powerful and in complete control. Athletes who attain a state of flow, also known as being in the zone, often remark that they experience a zen-like state of joy and are able to perform tremendous physical feats while feeling as though they are completely absorbed in the present moment.

That is what you can expect from Craze v2.

Written by soundcheck129 - #1 reviewer - View all my reviews
Fruit Punch

It's back - this is easily the most anticipated pre-workout in a very long time, and it is certainly worth the wait. While naysayers may have doubted the original formulation - ironically, due to its dominance - the reboot will surely silence any critics who actually try the product. To be sure, this is a different product with a different feel, but just like the original, the energy, focus, and drive are all unquestionably present and unparalleled. This version of Craze appears to have more caffeine in it than the prior iteration, which may be a concern for those sensitive to caffeine. However, this should not be a dealbreaker because it doesn't even take a full serving of the product to help you kick it into high gear.

Unlike a lot of pre-workouts that pile on the ingredients, Craze v2, like the original, keeps it pretty simple - the ingredient panel isn't a mile long with a ton of eight-syllable words. Those who are familiar with pre-workouts will find familiar ingredients, such as creatine and betaine, underscoring the straightforward and effective nature of the formula. Performance enhancers such as citrulline and L-tyrosine are also included, along with the aforementioned caffeine and green coffee bean extract.

And while the ingredients may seem simple for the most part, the synergy is truly amazing. Except for those who tried the original Craze, the effects of Craze v2 will likely seem like nothing you have ever experienced before. Even on your weak and tired days, you will find yourself dialed in within 20 to 30 minutes of drinking Craze v2, and the effects last long enough for a thorough workout. Both lifting and running benefited greatly from taking Craze v2, and it was easy to tell the difference between Craze days and non-Craze days.

Craze v2 mixes up very smoothly, with no chunks or grittiness, and the fruit punch flavor is very tasty. Overall, this is a top-notch pre-workout and like the first Craze will be the standard-bearer in the pre-workout category for a long time to come.
Was this review helpful to you?