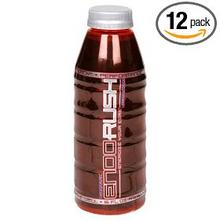 ENDORUSH is an ultra-premium energy and performance beverage, designed to support:

ENDORUSH addresses the following segments of the BSN Supplement Pyramid

NOX (Endurance & Performance ) Fusion: Nitrix oxide (NO) is produced naturally in the body and plays a role in the opening, or dilation, of blood vessels (i.e. vasodilation). NOX Fusion is intended to support NO production, particularly in the brain and skeletal muscles, where it serves as a catalyst for the performance and energy enhancing effects of the ENDORUSH formula.

L-Arginine Alpha-Ketoglutarate (AKG): Arginine is a conditionally essential amino acid and a precursor to nitric oxide (NO). Science suggests that chemically bonding AKG to arginine may enhance its conversion into NO, thereby increasing blood NO levels. NO stimulates vasodilation (i.e. opening of blood vessels) and may be involved in the
muscle growth (hypertrophic) response to exercise.

L-Histidine Alpha-Ketoglutarate (AKG): Histidine is an amino acid and a precursor to the neurotransmitter histamine. Histamine affects vasodilation via NO. Histidine AKG is considered a superior form of histidine for dietary supplementation.

Ketoisocaproate potassium (KIC-K): Potassium is an electrolyte and is crucial to muscle function and performance. Alpha-ketoisocaproate (KIC) is a precursor to the branched-chain amino acid leucine, the most potently anabolic of the amino acids. KIC has long been used as a muscle “anti-catabolic” agent.

Gynostemma Pentaphyllum (Gypenosides 95%): A Southeast Asian herb containing many beneficial saponins referred to as gypenosides, which have been shown to directly stimulate NO release in vitro. Ener-Tropic (Energy & Nootropic) Rush: Is a one-of-a-kind blend of methylxanthines and nootropics (brain stimulating ingredients) designed to support your brain and body with the most focused intensity and energy imaginable…all within minutes of ingestion.

L-Tyrosine & L-Tyrosine Alpha-Ketoglutarate (AKG): Tyrosine is a conditionally essential amino acid and a precursor to the catecholamines (epinephrine, norepinephrine, and dopamine). The catecholamines are involved in the regulation of neuromuscular performance, alertness, focus, and mood. Human studies suggest that tyrosine may enhance mental performance while under environmental stress.

Taurine: This amino acid regulates cell volume, insulin sensitivity, and is an antioxidant. Taurine maintains blood sugar via effects on insulin action. In animal and human studies, it has been found to reduce oxidative stress and support exercise performance.

Vinca Alkaloids (99% Vinpocetine, 99% Vincamine, 99% Vinburine): Vinca alkaloids are derived from the plant Vinca minor L., which is a member of the periwinkle family. Vinca alkaloids possess antioxidant properties and are used to enhance blood flow and ATP production in the brain (cognitive enhancement).

Glycerol Hydrating Polymers: This muscle-hydrating blend is designed to act as a powerful magnet for water, protein, carbohydrates, and other essential nutrients within the muscle.

Written by ponshoe - Top 5 reviewer - View all my reviews
When I go to GNC, I usually see the stuff around and ending buying a RTD, basically of protein. However, this day I was going to hit the gym, so I decided to take a look at the other fridge of energy boosters/fat burners RTDs. I got endorush.

The taste is decent, nothing great nothing bad. I finished it quickly and went to workout after 30 mins. The intense of the workout was good but it didn't feel different from others. After 1 hour and some minutes on an empty stomach ( I always stick to empty stomach with this kind of supps) no effects at all and I finished my workout exhausted. No pumps, no energy, however I felt a slightly boost on stamina and focus as well as good mood.

Im unsure about the effectiveness of Endorush, some say yay some say nay, I say nay.
Was this review helpful to you?

Written by soundcheck129 - #1 reviewer - View all my reviews
Endorush is basically BSN's version of a Red Bull, a lot of caffeine with some B-vitamins with AAKG, Citrulline Malate, and some NO-activators thrown in for good measure. In essence, this is NO-Xplode without creatine and in RTD form.

I was a little leery of Endorush, considering the age restriction, extremely long warning label(including instructions NOT to consume an entire bottle in one sitting, as it was meant for use "over a 12 hour period"). However, I elected to consume three servings (4 oz each, the bottle contains four) over a 20-minute period before my workout.

Energy and recovery were very good, felt elevated but not jittery, although the feeling has faded and was nothing outrageous considering my "overdose." The pumps were awesome, but I don't really take products for pumps since heavy enough weight will do that anyway.

Flavor was alright, I had the Fruit Punch, it was similar to Kool-Aid with too much water. No sugar though, so at 20 calories per bottle, it's not hard to fit in.

Overall, this would probably be better for someone very sensitive to stimulants as you might even get multiple servings out of the bottle. However for others, it falls into the typical BSN trap of being overhyped and overpriced.

I was expecting this to taste like Sprite but was pretty disappointed, this was overly sweet and syrupy. I wanted to really test this so I drank the entire bottle, completely fasted. I was severely disappointed. I felt a tiny boost in energy, but it lasted for only a few minutes and then it was game over.
Was this review helpful to you?

Written by veeshmack - Top 5 reviewer - View all my reviews
BSN Endorush is simply an energy drink produced by an actual supplement company. In addition to caffeine there is also other ingredients included to promote pump, vascularity, and strength to make it suitable as a preworkout product.
A bottle is supposed to have enough for multiple servings, 4 if im not mistaken. for me to feel anything from it i need to go through easily over 1/2 a bottle. I didnt get jittery from it, but for the price its not worth it. i can pick up near expiry bottles at $3 each, and i think its a rip off still. pump is hardly noticable, energy is not enough to kick you into high gear. unless you are getting them at $1 per bottle, i suggest passing it up
Was this review helpful to you?

Written by Halosoccer24 - Top 50 reviewer - View all my reviews
BSN Endorush is a very hyped up preworkout NO product that has amazed many people. It is an RTD product which is why I picked up two bottles and they tasted okay but i wasn't concerned about that. The pumps were what I wanted and I got them. The only reason I take these products is mainly for the pump and thats what I got. As for the other claims BSN makes towards this product, I can't say I was pleased. I did get good agression but as for energy it was only okay. The vascularity was also below average and my focus was a bit off and seemed like it didn't do anything to my focus. Lastly, the price is way too much imo for what you get.

Thanks and hope to post alot more reviews here.
Was this review helpful to you?