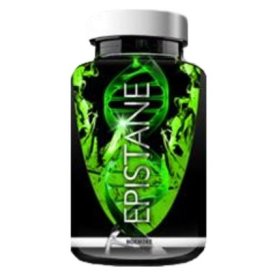 Finally the PRO-Anabolic, anti-estrogen we have all been waiting for has arrived! Epistane™, exhibits a strong, long lasting anti-estrogen effect that is organ tissue specific. This means it works only where you want it to work. Broad range estrogen blockers and aromatase inhibitors can result in system shut down, aching joints, and decreased IGF-I expression. Epistane™ binds specifically to the 17β-estradiol receptor protein in the target tissues. Because of its long lasting and strong effects on specific tissue, Epistane™ can significantly reduce and reverse the effects of gynocomastia because not only does Epistane™ specifically block estrogen in breast tissue but it induces an estrogen-depleted condition which leads to apoptosis or the death of the breast tissue cells. Studies show that small doses of the parent compound, Epitiostanol, at just 10-20mg/week showed a complete disappearance of the mass and pain in 25% of the male patients in the clinical trail, while the other 75% of the patients showed at least a 50% reduction in the mass and complete loss of pain in just 4-8 weeks. That’s results in 100% of the male users with no side effects. While compounds such as Clomid and Nolvadex also block the 17β-estradiol receptor, they do not elicit the same increase in protein synthesis and strength gains that Epistane™ can offer.

Epistane™ is more than an anti-estrogen, though, as it also binds to androgen receptors in skeletal muscle. As a PRO-Anabolic compound Epistane™ promotes increases in strength and lean body mass with an anabolic/androgenic value (Q ratio) of 12. With most powerful androgens there is a high risk of the natural suppression of the gonads. Epistane™, unlike other PRO-Anabolic compounds that have recently been released, is relatively mild on the gonads and, due to the anti-estrogenic effects and the fact that Epistane™ keeps LH levels elevated, post cycle therapy becomes a breeze. All effects combined make Epistane™ a great compound to produce dry, lean gains in muscle mass with minimal side effects and suppression of the body’s natural androgen production, while lowering the effects of natural estrogen or combating estrogen from endogenous/exogenous sources. This makes it a powerful tool when combined with “wet” compounds in attempt to increase gains and decrease side effects. One can also not overlook the potential benefit of this compound taken alone, especially when recovering from periods of “wet” compounds. If you don’t want to worry about how your lipid and liver values are doing and whether or not you are going to get gynocomastia or not then get Epistane™, stop worrying, and experience what others are raving about!


FAQ - What can one expect from Epistane™?

Written by kilo19 - View all my reviews
I took Epistane in a bridge cycle, 30 mg a day, 4 total weeks, 3rd week in I started taking Finaflex. My strength went up a little, but the terrible dry joints I received from this product made it hard to go heavy. I have always had small and fragile wrists, but once I started lifting it changed this, but this product made me feel like I had the wrists of a six year old. Terrible aching and inflamed pain any time I put a large amount of pressure on them. But besides that I had no sides, no acne (besides what I already have) and no lethargy. I noticed a good increase in energy and endurance in the gym. Libido went through the roof, it was almost annoying! Luckily I have a very loving g/f = ) I only gained about a pound and a half a week, this definitely is not a mass building supplement. My entire body looked much harder and toned while on this compound. Noticed no testicular atrophy. Vascularity and pumps were also up quite a bit. I have VERY mild gyno from puberty, and it rid me of it, at least until I started taking Finaflex. Finaflex made it flair a tiny bit, but nothing noticeable. Only I can tell that I have a small deposit under nipples. I am considering taking this product again in about 3 months, at 20 mg a day for 6 weeks, just to get a good hard lean look and hopefully permanently rid myself of the little gyno I still do have. I would say its worth the money if your looking to cut up, but would not suggest it to build mass unless you take it with another compound. I think if you were wanted to keep libido up while on a libido-killing compound, this would be the way to go, but I am no chemist. I used Formex for PCT at 4 caps for two weeks, 3 caps one week, 2 caps last week. Overall I gained a total of 8 pounds; it could have been more but I was not dedicated enough with keeping my calories up during my pct.
Was this review helpful to you?

Written by punksurfer024 - Top 10 reviewer - View all my reviews
I have done one complete cycle of this product and did enjoy it. The only thing i didnt like was the lack of results. While i did gain mass on this cycle i felt it was rather low for a hormonal product like epistane. Because it is a weaker hormonal product the amount of side effects that ive heard of is very minimal. Personally i had no side effects at all, which i was really pleased about. Most notably i had no testicular atrophy and was able to recovery with a very mild PCT. I do suggest this product to someone who is new in the world of hormonal products and would like to start with something that is low in sides.
Was this review helpful to you?

Written by phrozen5100 - Top 5 reviewer - View all my reviews
While momma was busy telling me to go Bold or go home, my poppa was singing a different tune. "Listen son, Epistane is the mild gyno killing muscle builder. You see these 12" guns and this rock hard 38" chest? Yeah, all this thanks to Epistane."

Muscle Gain - I've tried this product in two different manners. I first used it in a very light 8 week pulse cycle. I also used it at 50mg ED in conjunction with 600mg ED Bold. The pulse resulted in some relatively slow (about 1 lb per week) but solid gains, and only acne and some hair loss as sides. Running it at 50mg with Bold yielded much greater gains (about 2 lb per week), but also noticeably more sides.

Strength - This did little to help my strength when pulsed. It did, however, help with strength a bit when ran normally. However, thanks to joint pains, strength gains became quickly limited.

Low Side Effects - Aside from the usual acne and hair loss, dry joints/joint pain and intense muscle cramps became very familiar to me while running this. If you've never experienced back pumps, then you're in for a treat with this stuff. A big increase in blood pressure was noted (around 20 mmHg systole), despite the use of support supplements. This increase in blood pressure happened while pulsing and while running it straight. It's not nearly as friendly as Bold, but it's worth it.

Pump - I used this in conjunction with GlycerGrow, and I've never experienced such ridiculous pumps. They're so ridiculous that they sometimes hurt a little, and they left me with no range of motion whatsoever. No NO product has ever given me pumps like Epi/GlycerGrow has.

Value - This can be had for a very reasonable $34-40 at many sites. The sides are pretty reasonable for the solid dry muscle gains one can acquire while taking this. Yep, it's definitely worth the money.

Overall, this is a great little mild muscle builder. The sides aren't too awful bad, but taurine is a must with this product...unless you really enjoy 10+ muscle cramps a day.

I haven't quite reached my pop's massive proportions, but with enough Epistane, anything is possible.
Was this review helpful to you?