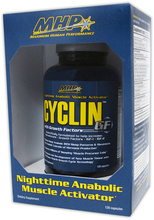 "Once in a generation a major development in muscle building technology occurs. The 21st century will be marked by the development of bodybuilding's newest muscle growth breakthrough: Cyclin-GF. Once other supplement companies catch wind of this amazing breakthrough they will be scrambling to figure out what we had uncovered. I am willing to put my reputation on the line and bet that no other supplement will ever come close to Cyclin-GF."
-Vincent Giampapa, M.D., MHP Research Team

The latest research developments in muscle fiber cell replenishment and growth reveal some stunning facts: Stored deep within muscle tissue are a vast supply of millions and millions of Muscle Precursor Cells (MPCs). Many of these Muscle Precursor Cells (MPCs) are in a silent or dormant state, waiting to learn their destiny. They can either be activated to kickstart "new muscle fiber growth" or they can remain dormant and eventually be sentenced for cell death.
Upon activation, Muscle Precursor Cells (MPCs) begin dividing and forming pools of myoblast cells that are programmed to become muscle fibers (myofibers), but only under the ideal anabolic conditions. Moreover, MPCs that are activated typically don't achieve maturity due to inadequate nutritive activation, growth promoting factors, suboptimal anabolic conditions, and high levels of undesirable muscle cell suppressing arrestor substances.

Cyclin-GF is a Scientific Breakthrough of Massive Proportions Until now you've only been tapping into a fraction of your muscle building potential, because within your body are millions of inactive Muscle Precursor Cells (MPCs). Imagine the impact awakening these millions of MPCs and forcing them to developed into mature muscle fibers will have on your muscle growth and strength gains. Through the development of Cyclin-GF, MHP's research team has discovered the secret of how to activate these dormant but precious Muscle Precursor Cells (MPCs) and promote the...
Average user rating from: 8 users