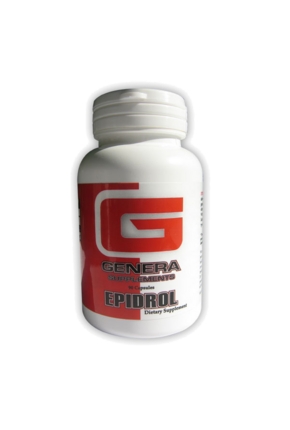 EpiDrol represents an entire new category we call “Designer Anabolics”. These are compounds that elicit what every athlete is looking for (increase in lean muscle, decrease in fat, anti-estrogen properties) without the negative side effects that had been considered “standard” up until this point.

Well those days of terrible sides such as bloating, acne, drop in libido and terrible crash after you ceased use are over. Introducing our first release in our Designer Anabolics line…EpiDrol!

EpiDrol is an extremely potent compound. It has about a 12 to 1 anabolic to androgenic ratio, which is very good, and nearly as good as oxandrolone (Anavar) or even greater, depending upon where you look. EpiDrol has around 11 times the anabolic activity of methyltestosterone after oral administration.

As mentioned above EpiDrol is extremely safe as well. It has no reported progestational activity. EpiDrol has demonstrated anti-estrogenic effects in both rodent models and humans and was even used to treat breast cancer in women. It has even been suggested as a means of treating gynecomastia.
What you can expect from EpiDrol…
• Amazing Strength Increase – 57 pounds increase on bench press in 6 weeks is average among users.
• Increase Lean Muscle Mass - 7-15 pounds in just 6 weeks is common!
• No Water Retention Whatsoever – No Bloating Just Pure Muscle!
• Gynocomastia Protection
• Increased Libido
• Increased Training Intensity
• Sense of Euphoria (Well-Being)
• Possible Reductions in Gynocomastia!

Written by Anonymous
I have been using this product now for 4 weeks at the 30mg dose, and i am on week 2 of 3 at 40mg and so far not very pleased. I have gained about 5 pounds and not really sure if it is all muscled because I have been eating like a horse while taking. I have been working out like a maniac and doing my best to take in as much protien as possible. Their has been a small strength increase but nothing too dramatic. So far the only sides are joint soreness, no libido (The first few weeks were booming, after the 3rd week it was disapeared), and minor back pumps.

Over all this is a very mild PH and not worth the price of the product or the 7 other supplements plus PCT that you need to take to feel safe while using.
Was this review helpful to you?

Written by Anonymous
Great product. Much like the Havoc and Epistane clones, Epidrol gives great strength and mass increases while keeping the side effects to a minimum. I used for 4 weeks as directed and gained roughly 8 pounds of lean mass and kept 7 pounds after proper PCT.
Was this review helpful to you?