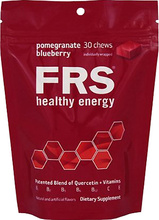 FRS's revolutionary blend of nutrients extends your body's natural energy, fueling you up when you need it while supporting your health over the long haul. There's no jittery feeling or roller-coaster ride - just prolonged energy that helps keep you focused and fully charged.

That energy comes from our secret weapon, quercetin, an antioxidant found in foods like blueberries, apples and grapes. Its incredible ability to enhance your body's energy system is what keeps you feeling energized longer. Add a host of essential vitamins and you're ready to tackle anything from minor workouts to a major marathon.

A single 11.5-ounce serving of FRS contains a healthy amount of quercetin, but one you'd have a hard time getting on your own; that is, unless you have a tendency to eat 40 apples in a single sitting.

Davis, Carlstedt et al. 2009
An independent, randomized, double-blind, placebo-controlled, cross-over study suggested that when 12 healthy, active (but not highly trained) men and women consumed 500 mg of quercetin (QU995™) in an enriched drink mix twice daily for 7 days, they experienced an increase in endurance and in VO2max (a typical measure of fitness). The study has been published online in the International Journal of Sports Nutrition and Exercise Metabolism.

An independent, double-blind, placebo - controlled crossover study on the effect of FRS on cycling performance in eleven elite cyclists was completed at Pepperdine University and published in the International Journal of Sports Nutrition and Exercise Metabolism. The results were dramatic: an increase in...
Average user rating from: 15 users

Full review on Bodybuilding.com
Thursday, 05 May 2011