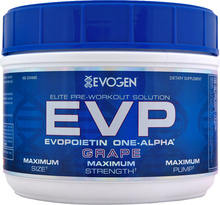 EVP Represents the future, the next step in physique- and performance-enhancing technology. Proven by science, perfected by research and tested on elite, world-class
athletes, there is no product like EVP.

EVP is the synthesis of biotechnology, nutraceutical ingenuity and the science of elite performance nutrition. Engineered to answer the needs of
hard training and elite athletes, EVP is the world’s true pre-workout solution.

"When I originally formulated EVP, my intention was to create a complete pre-workout solution,
using the most pure, most efficacious ingredients possible. EVP is made without the use of carbohydrates, fillers or stimulants. Carbohydrates can lead to insulin spikes that can effectively shut down the body's fat burning mechanisms. For this reason, EVP is 100% Carbohydrate-Free.
The overuse of stimulants can lead to adrenal fatigue, and pump-choking vaso-constriction and may actually limit performance in certain situations. I wanted to be certain that EVP is the most effective product available. That’s why EVP contains no caffeine or other stimulants."
- Hany Rambod, The Pro Creator®. Creator of FST-7 Training and CEO Evogen Nutrition.

Athletes of all disciplines, bodybuilders, mixed martial artists, figure and fitness competitors, strength and endurance athletes may benefit from the incredibly advanced, muscle building and performance enhancing components of EVP.*

"I work with some of the most elite athletes in the world, where meticulous, exacting and specific...
Average user rating from: 142 users

Full review on Bodybuilding.com
Monday, 12 May 2014