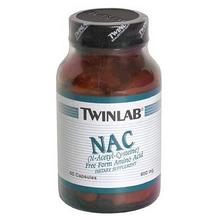 TwinLab NAC (N-Acetyl-Cysteine) is the pre-acetylized form of the simple amino acid Cysteine. N-acetyl-L-cysteine is a powerful antioxidant and a premier antitoxin and immune support substance. Antioxidants neutralize free radicals, which are produced by normal metabolic activity. When free radicals are left unchecked they cause damage to cells and DNA and are considered by scientists to be a major factor in the aging process.

Supplemental N-acetyl-L-cysteine may have an anti-aging effect by increasing glutathione levels in:

NAC is an antioxidant which becomes easily converted into L-Cysteine after being absorbed. Cysteine is important for homeostasis and is a precursor of glutithione, a protected sulfur containing amino acid. NAC is an efficient means for supporting blood and tissue cysteine levels.

N-acetyl-L-cysteine has been shown to provide protection against free radicals as well as a broad range of toxic hazards such as: acrolein (found in barbecue and cigarette smoke and auto exhaust), bromobenzene, paraquat (a toxic herbicide), overdoses of acetaminophen, and the side-effects of cyclophosphamide and adrimycin (anti-cancer drugs).

N-Acetyl-L-cysteine is also a better source of glutathione than taking glutathione itself, because less than half of supplemental glutathione gets out of the digestive system and into the body. This greater efficiency is important since cellular glutathione levels tend to drop 30% to 35% with age.

NAC is currently the dietary supplement of choice for building up or conserving the body's stores of glutathione, cysteine, and other sulfhydryl antioxidant resources. NAC is well tolerated, is well absorbed, resists enzymatic breakdown, and has been proven to raise internal GSH and cysteine levels when taken orally.

Written by soundcheck129 - #1 reviewer - View all my reviews
I've been using this to reduce the wear and tear on my liver from my probably ridiculous protein intake. It's hard to really see the results of this without technical medical exams, but it's a cheap product and studies suggest it works.
Was this review helpful to you?